Let's wrap this week up!

It has been a crazy hectic week.  I had to get another mammogram and that was followed up with an ultrasound.  I'm lucky to have gone in before I turned 40 because now I have their undivided attention sooner rather than later. To think I could have had all this attention later but just couldn't wait!  Now I'm getting waaay more than I wanted.

I am however finally getting an MRI done for my foot!!

This week I hit almost all my target meals.  Monday I went out to eat though and then I decided to pick up the next day with the scheduled meal.  I did skip Friday and we ate leftovers.  So I made 3 meals at home this week.

Tuesday's meal was tacos, rice and beans.  All homemade down to the flour tortillas and I even made fresh guacamole. 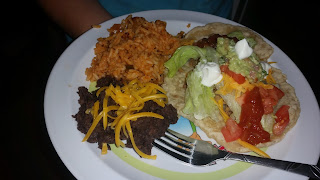 This is the second time I have made the tortillas but my oldest doesn't recall me having ever made them so she was impressed with my hidden talent.  She even jumped in rolled out a couple and cooked them up.  I think she did it for bragging rights.

The meal I had set up for Wednesday was moved back a day so this should have been Tuesday's but, that's neither here nor there. This meal should have been a crockpot meal but I forgot to make it in the morning.  But it's soup so I just threw everything in a pot and let it do its thing. 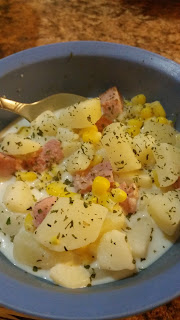 Corn and potato with ham chowder!  It was pretty good. It wasn't very thick but it was filling.  Next time I may make a side of bread to go with it.

Thursday was finally the end to the salmon that I have been trying to make for the last few weeks.  I paired the salmon with couscous and spinach! 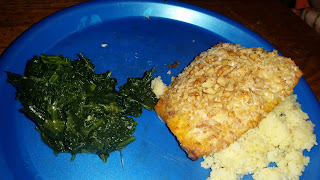 Since my oldest did such a great job last week making the couscous for our dinner she was in charge of it this night as well.

I'm still chugging away on my book (s).

Today was the last day of dating your friend and I will be starting a new week for you starting tomorrow!