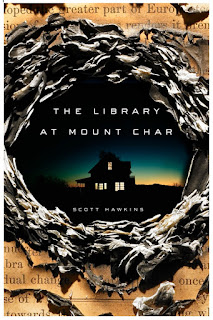 This fiction book was the first book by Scott Hawkins.  The story is a combination of thriller, suspense, fantasy and mystery.  The story starts out with a series of characters that all play a different role in a larger takeover.  Each character is like a soldier with their own speciality.  They study a focused area and advance to the next level. Making each of them stronger and a more dangerous group of individuals the more they read.

Carolyn is visibly the main character in the story.  She is in charge of learning languages and has a secret mission of recruiting.  She is not the leader of the said "soldiers", she too is just a soldier.  However her self declared job is a main focus of the story.  She is the good student.  She goes above and beyond her job of reading in order to complete a bigger mission.

The characters seem to be a hodge podge of misfits if not misguided unsupervised teenagers.  Although I am not very sure how old they really were.  They did however lack in the fashion department as their was a tutu, bicycle shorts and leg warmers mentioned more than once.

Now imagine if the world you lived in was slightly different.  Not flying cars and robots but having a pet lion or food falling from the sky.  Does that sound safe or inviting?  Would you be concerned enough to call the helicopters and tanks in?  This story will make you wonder about the future of the country, or universe.

I invite you to entertain your conscious.  Read this book and let your imagination flow.  Follow the story closely as there are some twists and turns that require your undivided attention.
Posted by Belugas in VA at 7:16 PM