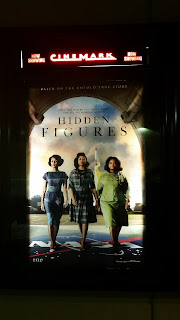 This drama was released into theaters based on true events in Dec and I finally got around to seeing it.  The film is rated PG and has a run time of about 2 hours.  The film had a great cast including Kevin Costner, Octavia Spencer and Kirsten Dunst and many more.

This film takes place in Virginia in the 60's.  The story follows 3 women as they work in various areas of NASA.  The film touches on the day to day obstacles they faced based on the color of their skin.  Segregated buses, drinking fountains and bathrooms.

Promotions for two women lead them into a more responsible role with a lack of appreciation and respect.  The third women played by Octavia Spencer works harder to secure her fleet of women and their jobs by learning the new computer system that's being brought in.  This learning process takes us to a stop at the local library which of course is also segregated.

I have not read the book and I'm not aware of what was added to the movie to enhance it but a few of my favorite parts including: the scenes where Katherine Johnson (Taraji P. Henson) ran across the base to use the bathroom, where Mary Jackson (Janelle Monáe) told her case to the judge and when AL Harrison (Kevin Costner) took down the "coloreds" bathroom sign.

There was enough going on though the movie that I wasn't bored.  I sat entertained through the duration of the film.  I walked out empowered with the confidence that I could do anything if I set my mind to it.  It made me want to encourage the children of the future to keep at what your good at be it science or math.  They will get recognized for their accomplishments!

Have you seen this film yet?  Any plans to?  What's the last movie you saw?
Posted by Belugas in VA at 4:52 PM